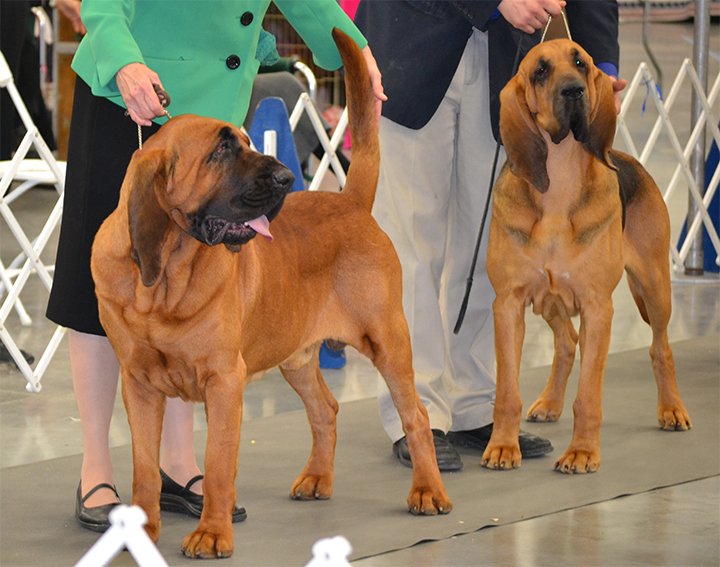 The Bloodhound made its appearance in Europe long before the Crusades, when the first specimens were brought from Constantinople in two strains, black and white. Established in America for over a century, it proved early on to be a tireless worker for law enforcement, being so accurate that evidence trailed by a Bloodhound has been accepted in a court of law.

The Bloodhound is a scent hound of great size and strength with a noble, dignified expression. No wonder Bloodhounds look so noble and dignified (sometimes): they have a distinguished history. St. Hubert hounds, ancestors of today's Bloodhounds, helped Europeans celebrate the Millennium in the year 1000.

Today's Bloodhounds are descended from those hounds, bred by Hubert, a 7th-century French monk who later became patron saint of hunters, and from hounds bred by other medieval noblemen who kept scent hounds as hunting dogs. Many strains, including hounds brought back to Europe by the Crusaders from the Holy Land, have blended to produce today's gentle giants. It was not until the 16th century that the Bloodhound was used to track humans.

Mantrailing has enjoyed a steady increase in modern day law enforcement and search and rescue. Trails performed by proven trailing Bloodhounds are permissible in court. "Blood," in the breed name "bloodhound," probably comes from "blooded" - meaning a hound of pure breeding. In French-speaking parts of Europe Bloodhounds are still known as St. Hubert hounds.